The People’s Democratic Republic of Algeria (Arabic: Al-Djazair) has an area of ​​2,381,741 km², making it the second largest country in Africa after Sudan. Algeria is located in North Africa. In the east it borders on Tunisia and Libya,in the southeast on Niger,in the southwest on Mali and Mauritania and in the west on Western Sahara and Morocco. See Algeria country abbreviation.

The coast in the north to the Mediterranean is over a thousand kilometers long. Algeria can be divided into three characteristic large landscapes: coastal plain, Atlas Mountains and Sahara. The coastal plain (also called Tell) extends along the Mediterranean. In its western part it consists of dry valleys and plains suitable for cultivation, in the eastern part of a fertile hilly country. The Atlas Mountains, a mountain range up to 2000 m high, divide the north from the south of Algeria.

About 80% of the Algerian country is south of this mountain range and is part of the Sahara, the largest desert area on earth; this means that only around 3.3% can be used for agriculture. The Algerian part of the Sahara consists of extensive dune areas (large western and eastern Erg), gravel and rock rubble zones and an extensive high mountain range called Ahaggar. With the Tahat (2918 m), this mountain range has the highest elevation in the country. Another striking landscape in the Sahara is the highland of the bulkheads between Tellatlas and Saharaatlas, which serves as a pasture area for the nomads. The most important and longest river in Algeria is the Chelif (also spelled Ch¨¦liff or Sheliff), which flows into the Mediterranean.

South of the Atlas there is a hot arid desert climate, while the smaller part of the country north of the Atlas shows a Mediterranean climate with winter rain. The difference between the two parts of the country is particularly clear when it comes to the annual rainfall. If the Mediterranean capital of Algiers still has around 764 mm per year, the values ​​drop drastically towards the south. In Biskra about 200 km inland near the Tunisian border, there are still about 161 mm, in In-Salah in the region Erg Chech in the Sahara still 17 mm. The average temperatures in Algiers are 12 °C in January and 26 °C in July, in Biskra it is 11.5 °C and 34.5 °C in the corresponding months, and 13.5 ¡ã in the desert city of In-Salah C or 36.5 °C.

The vegetation of Algeria is also different in the north and south of the country. The flora and fauna are also influenced by the altitude. Basically, all wild plants are set for longer dry seasons and irregular rain.

Only about two percent of the country is covered by forests. The subtropical trees are found almost exclusively in the rainier mountain areas. Here, supported by reforestation efforts, are smaller cork oak forests. The Tell region north of the Atlas was once completely overgrown with forests. Today it is covered by maquis vegetation typical of the Mediterranean region, which consists of shrubs and isolated evergreen bush forest. The dry plateaus in the interior near the mountains show typical steppe vegetation with grass and filigree hairy subshrubs, so-called wormwood plants.

South of the Atlas Mountains, Algeria has a share in the Sahara. The vegetation of this desert region is very sparse with the exception of the few oases (date palms), some parts have no vegetation. There are isolated tufts of grass and arid bushes that have adapted to the extreme drought. The rarely occurring rainfalls let the desert “bloom” for a short time.

Wild sheep, so-called moufflons, live in the mountain regions to the north, but wild boars and barbary macaques also have their main habitat in this region. The Sahara region is inhabited by gazelles and hyenas, and jackal-like jackals are also very common. The leopards and cheetahs that used to be common in the past have become extremely rare. Other mammals that live in the Sahara region are the gerbil and desert rabbit. Scorpions can be found across the country, but especially in the dry and semi-arid regions. Numerous insects also populate the soils, a special feature is the large swarm of locusts that occur at incalculable time intervals.

Algeria has a population of 32.53 million, the majority of whom live in the coastal area along the Mediterranean. The largest city and capital of the country is Algiers (El Djazair) with 3.5 million residents (agglomeration). According to COUNTRYAAH, 70% of the population count themselves among the Arabs, about 30% belong to the Berber ethnic groups, 0.5% are made up of other groups, including just over 100,000 Europeans. The majority of those Algerians who see themselves as Arabs are descendants of Berbers. In the past centuries, these have mixed with the various invaders, some of whom came from north African, some from southern European and some from sub-Saharan Africa.

The majority of the many Europeans who lived in the country during the colonial period left it after independence. The country has one of the highest birth rates in North Africa, the population has a very low average age. The state religion is Sunni Islam, to which 99% of the population belong. A small minority of 0.4% is Catholic, and there are also religious communities of the Ibadites and Marabuts.

Population growth is 1.2% and life expectancy is 73 years. Around 30% of the population are illiterate. The official language is Arabic, the Berber language Tamazight has the status of a national language. 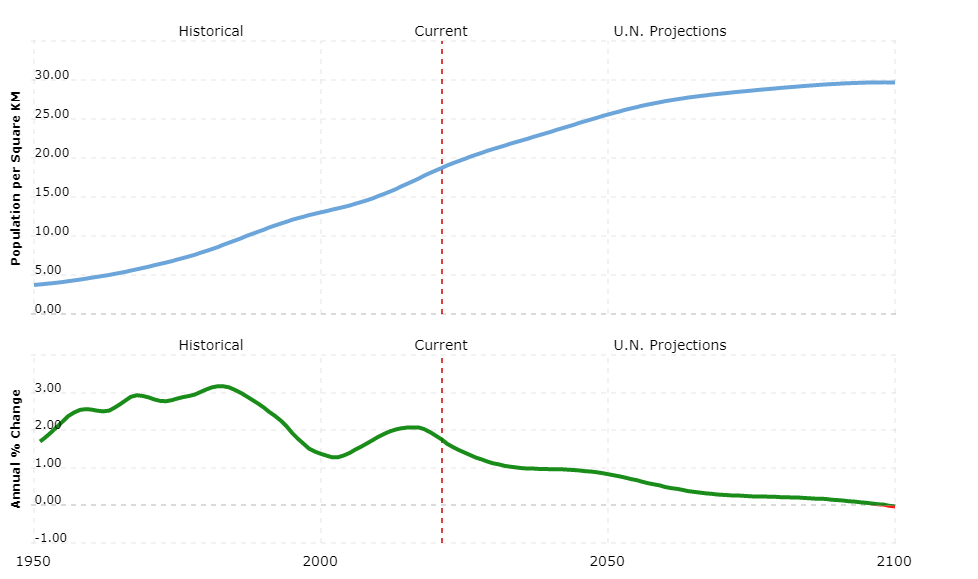 Algeria is a presidential republic according to the 1996 constitution, which changed from a one-party system to a multi-party system. The president, who is very powerful (Abdelaziz Bouteflika, since 1999) is directly elected by the people for five years and is the commander-in-chief of the armed forces. The president can be re-elected several times since a constitutional amendment in 2008. He appoints the head of government (Abdelmalek Sellal, since 2012), who in turn appoints the cabinet.

The administration is divided into 48 Wilayat (districts). The legal system is based on French and Islamic law.

Algeria is one of the richer countries in Africa. The gross domestic product has been growing continuously for years. The extraction and export of oil and natural gas are decisive for the Algerian economy. The proceeds from energy exports represent around 96 percent of foreign exchange earnings. The dependency on the oil and gas sector also poses a risk. There is a lot of catching up to do compared to neighboring countries in tourism.

Less than 40% of food requirements are covered by in-house production. The agricultural sector has been heavily geared towards exports since the French colonial era. Intensive agricultural use is only possible on a narrow strip in the north. The extensive, partly nomadic livestock farming focuses on the highlands of the bulkheads and the northern Sahara. The main agricultural products are cereals, sugar beets, potatoes, legumes, tomatoes, olives, dates, figs, tobacco, wine and citrus fruits.

The focus in the industrial area is on oil and gas processing as well as the iron and steel industry and the metal processing branches based on it. There is also the processing of agricultural products.

The transport network is concentrated in northern Algeria.